Chris Paschke is an accomplished fine artist and calligraphic designer currently residing in Tehachapi, California. Her fascination for calligraphy and pen written letterforms began in college and has been a lifelong study. First captured by the precision and structure of historic illuminated alphabets, her work was set free when studying with European masters from Germany, Austria, and Russia who encouraged abstraction and personal interpretation.

More recent years have pursued studies in traditional Japanese sumi-e, Chinese painting techniques and calligraphy.The type of minimalism inspired by Asian thought is seen in her softer grasses, florals, and decorative collages. Her comfort and skill with the pointed brush and Asian calligraphy has inspired on-going study with Asian masters of calligraphy and Sumi-e in both Asia and the USA, having been to China five times by 2007. She prefers purchasing her ink, brushes and handmade papers in Asia where the materials are traditional and there is a far better variety. 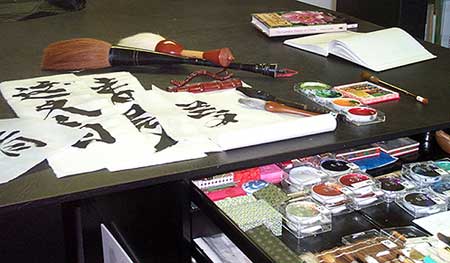 Her original calligraphy, calligraphic abstractions and Asian interpretations in the Calligraphy and Asian Galleries of this site are contemporary collages of color and texture inspired by the abstract expressionist movement and in particular the art of Kline, Pollock, Rothko and Motherwell. About ten years ago she discovered the early still life tinted washed lithographs of Andy Warhol. This look then combined with traditional Chinese heavy line scroll paintings which has produced a large group of bold, linear floral and still life images with tinted color washes. 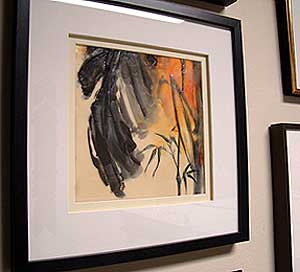 Her most recent passion has been working with encaustic medium. Encaustic is the ancient art of melting purified beeswax and damar crystals together that may then be painted, poured, and spread onto Baltic birch and hardwood panels. Each newly applied layer must be heat fused to the previous layer in order to truly be considered encaustic, though use of opaque and translucent waxes is also found in mixed media on paper. This medium is unlike any other in the way it is initially prepared, applied, and then displayed upon completion. It may be two or three dimensional and is used in sculpture as well as on its own. The image here illustrates encaustic over a sumi painting that was mounted to rag board, then carved into to reveal the ink details after completion. It was then sink mounted under glass. The newest Encaustic Gallery has a sampling if current images both on panels and 8-ply rag boards.

"I have spent my entire life drawing, sketching, painting, lettering, and framing. I've been trained to make paper, grind ink, build brushes, cut quills, and frame finished art. I have created logos, designed certificates, and produced 4' x 8' originals for corporate collections, but wax is my newest love. It is sensitive and beautiful, responsive yet defiant...I just love it."